tl;dr: In 2018 I started practicing Brazilian Jiu-Jitsu. The year 2020 was not amazing for martial arts due to the pandemic, but I managed to progress nonetheless and I received my first belt promotion.

I started practicing Brazilian Jiu-Jitsu (BJJ) in August 2018 as a somewhat overweight and completely out of shape 34-year-old IT nerd.

For the uninitiated, BJJ is a grappling martial art. It’s a bit like wrestling in that there is no kicking or punching, but the rule system also allows submissions. When BJJ is practiced with a gi (the Judo/Karate style kimono), it’s typically called BJJ. When it’s practiced without a gi, no-gi, it’s called submission wrestling. (There is some nuance there, but it’s basically the same thing as BJJ.) In either case the goal is to submit your opponent by chokes or joint-locks. Failing that, you are awareded points for improving your stance in the scuffle, for example by sweeping your opponent to the ground while getting on top of them. Sparring in BJJ is called rolling. It’s called Brazilian Jiu-Jitsu because the traditional Japanese techniques were refined and developed further by the Gracie family in Brazil in the early 20th century. The UFC (Ultimate Fighting Championship) you may have heard of was initially devised by the Gracies as means for promoting their martial art.

Anyways, for me the beginning was rough. Not only was I out of shape and physically very weak, I managed to bruise my rib in one of the first practice sessions. Injuries in general suck, and this was one of the worst I’ve ever sustained. I was barely able to walk for a while, and I had to sit out practice for a couple of weeks.

Eventually my rib healed and I returned to the mats. I was still very weak and I still sucked, but, for whatever reason, I persisted. And, as you’d expect, time went on and eventually I wasn’t that weak and I didn’t suck that much. I mean I still wasn’t (and still am not) good at BJJ, but it became a routine. It became something I do, and that felt pretty good.

By 2020 I was still a white belt, but I had at least practiced for a while and I could cause some trouble for my opponents on the mats. My goal for the year was to take part in my first-ever (and also potentially last-ever) BJJ competition.

I’m not particularly keen on the idea of competing, even though it is a big part of the BJJ culture, because I'm a weak mid-thirties IT guy who doesn't stand a chance of the elevated injury risk, but I figured I’d want to try it at least once to see how it feels.

So I set my eyes on the BJJ Finnish Open tournament in April 2020, and started bringing my weight down to the lowest feasible weight division. I suppose I even trained a bit harder and focused a bit more…

And then Corona hit.

The gym closed down some time in March, and naturally all the competitions were either cancelled or postponed.

I tried to keep up doing some physical excercises, but after a while my motivation was gone. It turns out I need either a purpose (e.g. cycling somewhere) or a healthy amount of of peer-pressure to keep excercising, and the corona-spring had neither. 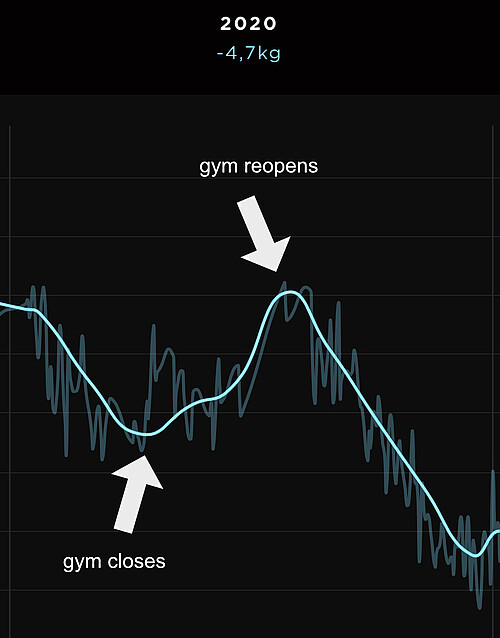 Fast forward to June when the gym re-opened just ahead of our summer holidays. I managed to squeeze in some time on the mats, but it wasn’t until August when things started to get back to normal. Obviously I had both gained weight and lost muscle during the longish break, but in the end it was surprisingly easy to get back to the rhythm of practicing BJJ. I only wish I had at least kept my weight in check during the time spent off mats. Oh, well.

The biggest surprise of the year took place in early October when I, among a few other people who started at the same time as I did, was awarded my blue belt. It took me just over two years (minus a few months due to corona) of practice to reach the first coloured belt. It sounds like a lot, but unlike in some other martial arts, the belt progression in BJJ is typically a bit slower. If anything, for someone with my skills and physique, two years sounds pretty generous. 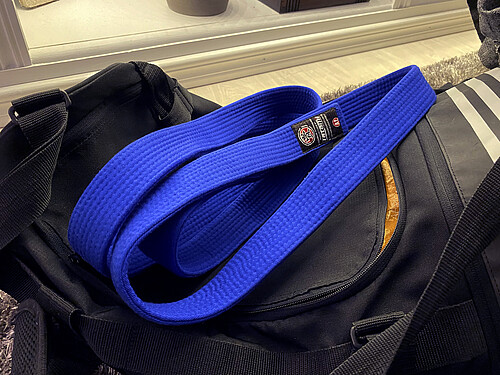 A quick aside on the BJJ belt system: it comprises of white belt, followed by three coloured belts (blue, purple, and brown) and ultimately a black belt (and potentially a couple more if you happen to be Brazilian and have a certain surname). I’m not sure how it is with other martial arts, but the BJJ community at least seems to take its belt system pretty seriously. Especially at the higher levels, the lineage of the belt promotion seems to be a pretty big deal. Personally I’m not too fussed and happy to be at whatever level the coach deems appropriate.

For the rest of the year I managed to maintain at least a semi-regular training schedule. Going to the gym during the pandemic was (is), obviously, pretty questionable, but luckily at least to my knowledge there haven’t been any cases of the virus spreading at the gym. I stopped going a couple of weeks before Christmas to ensure I wasn’t unwittingly spreading the virus to my family members and older relatives during the holidays.

During the year 2020 I also kept track of the time I spent on the mats. According to my notes, I practiced BJJ for a total of 66 times (12 of which were an open mat, i.e. no guided technique practice with a professor). These are a mix of 60 and 90 minute sessions. If I assume half of them were the shorter ones, the total time spent on the mats on 2020 amounts to 99 hours. It felt like a lot at the time, but in retrospect it’s not terribly impressive, even accounting for the corona-virus.

How 2021 will shape out to be is anybody’s guess, but here’s hoping that the corona-situation remains stable, the vaccine brings the relief everyone is eagerly waiting for and that practicing BJJ can continue at least in some capacity.